As Rohingya across the globe marked one of the greatest tragedies of the modern time, Rohingya Action Ireland hold Rohingya Genocide Remembrance Day on Saturday, August 25.

The remembrance day was jointly organised by academics, students, local Irish organisations, volunteers and people from the diverse walks of life in Carlow – the home to Rohingya community in Ireland. 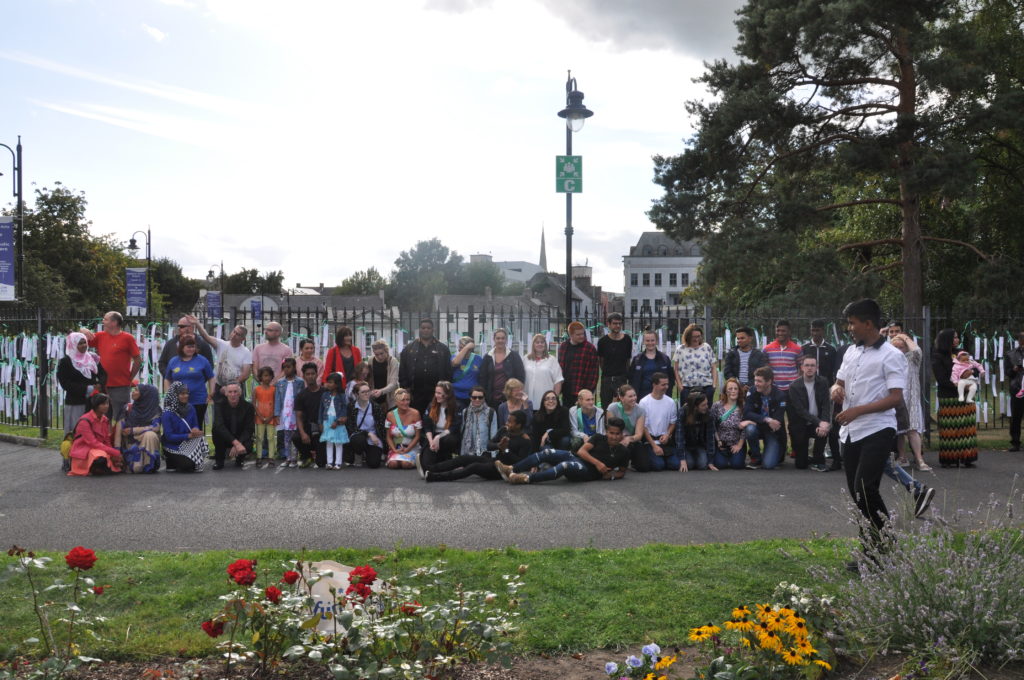 The Dream that grows

Rohingya boys and girls who were born in Bangladesh refugee camps and resettled in Carlow, have written the script of film and shot scenes under the direction of American Anthropologist James Ceretani.

It depicts the strains of life in the refugee camps juxtaposed with the dream of a peaceful life that the community, particularly the young generation enjoys in their new home in Ireland.

The cast of “Waking Dream” were presented with the certificates of successfully completion of filming documentary by Senator Jennifer Murnane O’Connor and Dr. Anita Schug of the European Rohingya Council.

At the end of the screening, head of UN’s CERD (Committee on the Elimination of Racial Discrimination) Anastasia Crickley, local politicians, organisers and volunteers were served with Rohingya traditional food.

The documentary and the photo exhibition were also continued to display on the remembrance day.

A day to live long in memory

On Saturday, the stage was being prepared by the organisers for the special day of importance for Rohingya and Ireland at Carlow College, St. Patrick’s.

Karl Duffy, Social Inclusion Manage of Carlow County Development Partnership, opened the ceremony, “Around this time last year, over 700,000 people were forced to flee their homes (in Myanmar) and to move the camps in Bangladesh. They still live there, born with children, denied education and denied a future. This occasion today is the moment to remember and to stand in solidarity, and to encourage our awareness of what is happening and our supports for Rohingya.”

“We are here today remembering and honouring the Rohingya victims and survivors to uphold the terrible truth of Rohingya Genocide, to stand up against those who distort and deny it and to stop this madness. What happened to Rohingya ethnic minority on August 25, 2017 and afterwards is simply pure evil,” Dr. Anita Schug delivered her powerful message. 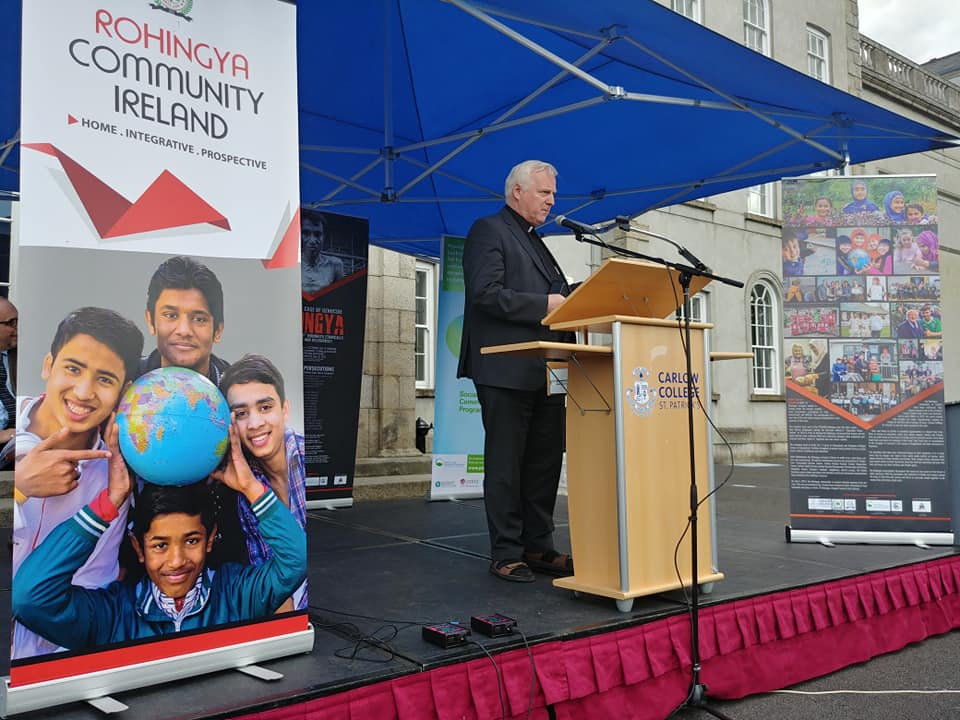 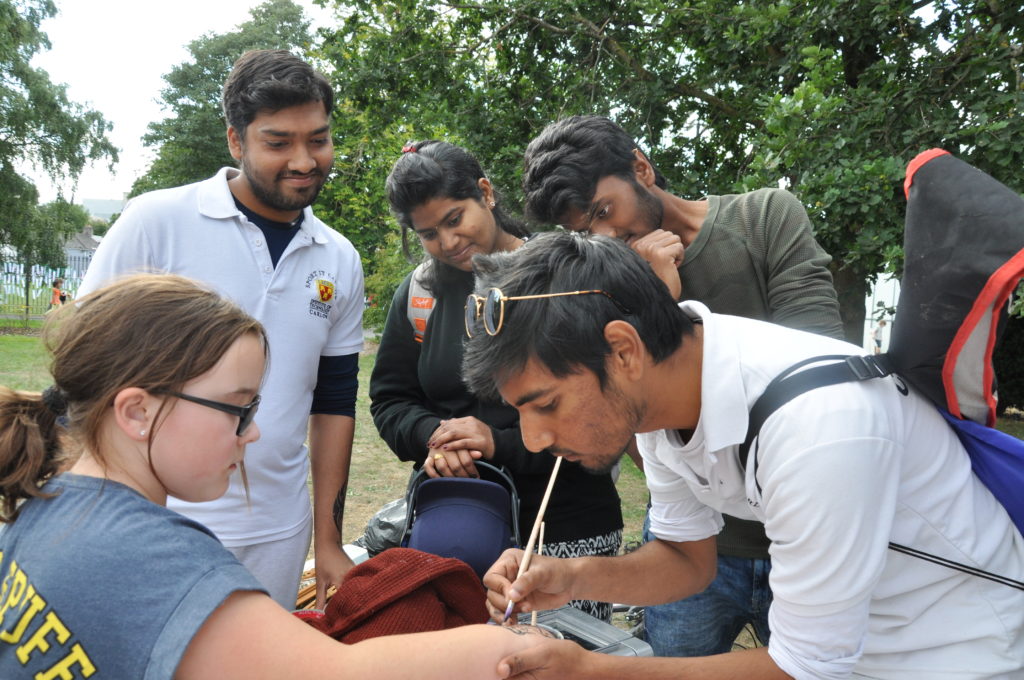 Fr. Conn O’ Maolhomhnaigh, President of Carlow College St. Patrick’s proceeded a minute of silence following the ringing of Church Bell in remembrance to the Rohingya victims who have lost lives during the Myanmar Genocide under the hands of Myanmar Military.

“The flag ceremony which is an important part of today. The Pope came to Ireland this morning, and usually for occasion like that we have the national flag and the papal flag flying for two days.

The remembrance ceremony was concluded with the recitation prayer by Dr. Umar Al-Quadri, the Chair of the Irish Muslim Peace and Integration Council, and “Wall of Darkness” poem by Haikal Mansor from Rohingya community.

The celebration of Rohingya ethnicity was one of the main themes of the day as Rohingya face cultural suppression in Myanmar. The supporters were entertained with Rohingya traditional music, food, sports and henna by the Rohingya community.

A special sport “Crickling”, a hybrid of Cricket and Hurling was also organised by GAA and Carlow Cricket Club.

Face painting organised by Students Union of IT Carlow brought colour to many girls and women.

Agnita Kenny and volunteers from Students Union of Carlow College, St. Patrick’s, displayed ribbons for a thousand of Rohingya victims who were killed during the slow-burning genocide in Myanmar.

The ribbons detailed the name, the village, the age and the date of victims in honouring the lives of lost.

Rohingya Genocide Remembrance Day is the day which brought many local people and organisations together in standing up with victims and survivors of genocide, and also celebrate the cultural identity in the new home of the community.

“It is important that we commemorate the dead and those who have tragically lost their lives under the Myanmar Military and Aung San Suu Kyi. It is equally important that we demonstrate hope. For people to act they need to have the information of the reality but they must also know that there is hope. By working together we can raise awareness; lobby, increase social justice and most of all believe that each one of us can make a difference in peoples’ lives by believing in hope.  Today we have remembered the dead with the Rohingya community in Carlow. We have also tried to increase Rohingya visibility and raise awareness. A day of very mixed emotions,” Stephanie McDermott, Lecturer Carlow College St Patrick’s and Secretary to Rohingya Action Ireland spoke of the importance of the Remembrance Ceremony. 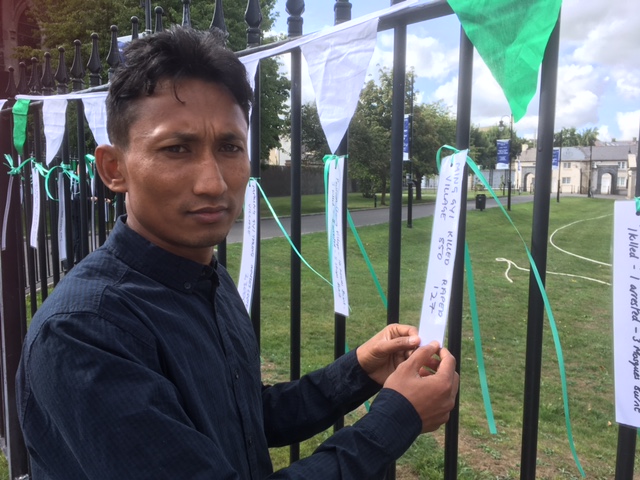