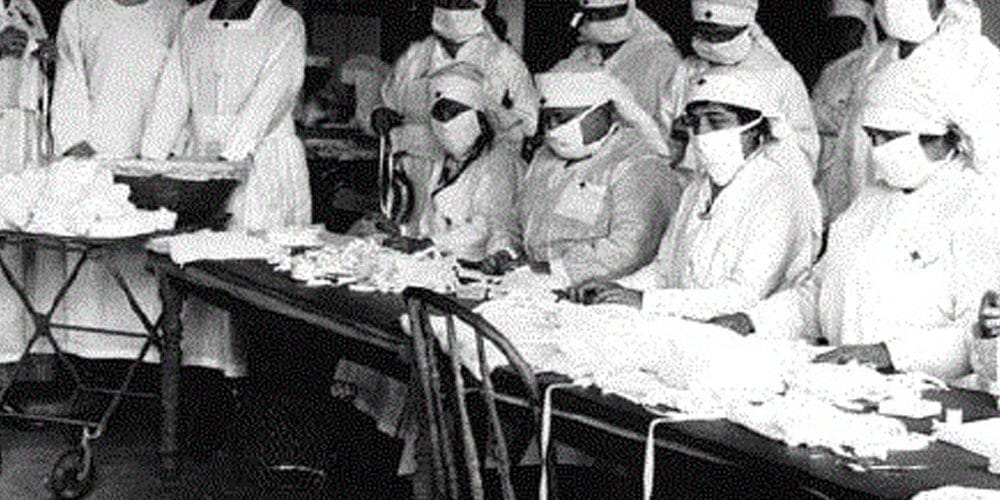 Adults in huddles, worriedly discussing a mystery disease the newspapers have been warning is on the way. Children eavesdropping, sensing the fear that is being hidden from them, become curious listeners, and search the newspapers for clues.  Corona virus in 2020?  No, a ‘mystery plague’ in the early summer of 1918, as the Great War lumbered towards its end.

We know now that this ‘dread disease’ – as some of the newspapers called it- was the 1918-1919 influenza pandemic, one of 15 influenza pandemics on record since the 1500s, and the biggest killing influenza epidemic the world had known, with a death toll upwards of 50 million according to the World Health Organisation, and possibly even as big as 100 million.  Bigger than the Black Death, which decimated Europe’s population, and caused a drastic decline in the economy.  Different to this current crisis, which is caused by a corona virus disease, COVID-19.  Corona viruses also include the scary SARS, MERS…and the common cold.

I have spent the last 15 years studying, as a historian, the social, economic, medical and political history of the 1918-19 influenza pandemic in Ireland.  It is a gripping story, of a society laid silent as the disease passed through towns and townlands, commerce, court cases and normal life disrupted, events cancelled, and community soup kitchens set up to feed the ill.  Of families suffering terrible losses, of orphaned children and ongoing physical, economic and emotional damage.  While COVID-19 is not that disease, and we hope public health, medical science and medicine have advanced to a stage where the death and destruction of the 1918-19 pandemic could not happen again, there are many echoes.  And many lessons that can inform the present situation.  And one of those is fear or panic, and the need to manage it carefully.

Panic is often seen as a key component of social responses to new epidemic diseases, particularly as they first emerge, and then as infection increases rapidly. Doctors gave out about it in 1918, as they are doing in the current crisis; sometimes they seem to almost equate the risk of panic to the risk of the infection.  In 1918, they told journalists that they were trying to ‘control influenza hysteria, a danger in itself’. One doctor advised that there was nothing very serious in the disease if precautionary measures were taken, and if people took to their bed as soon as they got symptoms. ‘In some of the country districts people are becoming greatly alarmed at the spread of the disease … there is a danger that the people may become panic stricken by even unexaggerated accounts of the ravages of the epidemic and thus help on the disease.’

Public health managers also tend to blame the media for spreading panic during a major epidemic.  We’ve heard it already, with the corona virus.   The president of the Royal Academy of Medicine in Ireland, George Peacocke, reprimanded the newspapers in November 1918, at the height of the second wave of the influenza pandemic in Ireland,  for making the public ‘unduly alarmed by the writings of the press.’  He didn’t seem to note any irony in that he was speaking at an exceptionally rare extraordinary general meeting of RAMI, where similarly alarmed medical doctors were desperately pooling their thoughts on treatments for a disease that was defying contemporary medical knowledge, and puncturing their confidence in bacteriology, which seemed to be at last making serious inroads into reducing the massive infectious disease burden.

But for the most part,  then and now, media interests behave responsibly and provide a vital role in epidemics, bringing information to the people, in a way that public health cannot.  Radio and television broadcasts are accessible to those with reading difficulties, or without access to computers and therefore to websites providing information.  Journalists know how to communicate in sound bites, with clear expression that most people can understand and absorb. This is something the medical profession has traditionally found difficult. In 1918, the Local Government Board for Ireland’s public notices on the influenza epidemic were anything but clear and concise.

Poor information also creates panic.  People think there is something that is being hidden.  Somehow medicine has to tread a fine line between recognising this, and protecting the identity of sufferers.  In Carlow this week, my students were concerned that the first two Republic of Ireland cases are ‘in the east’.  Rumour had gone around that it was in a neighbouring town, and they were experiencing unnecessary anxiety, that could have been quelled with a more local description than ‘east of the country.’  Epidemic fear needs to be carefully managed, to build trust between the public and health authorities. We need a little more transparency than we are currently getting from the epidemic management team, particularly as fears will increase as the numbers of ill escalate rapidly in the coming days.

But does panic actually have a merit that such critics do not recognise?  While the word panic itself suggests an irrational response, the panic we have seen in recent days could also be described as cautious planning, or even responsible behaviour. Stockpiling a few weeks’ supply of prescription medicines, and paracetamol or ibuprofen, hand sanitisers and tissues, toilet paper and disinfectant, and dry foods or UHT milk means people will not have to go out if the disease emerges in their locality, or if they are in one of the risk categories.  It may save people from infection, or even slow down the passage of the disease through our community, lessening the pressure on medical services.

Increasing panic as the disease becomes more widespread will also mean that a complacent public that has been listening and reading the media stories, but still sees the crisis as something that does not apply to them, will reconsider.  If panic persuades people to wash their hands, limit their movements, and take other precautions, it will be a major aide to the control of the disease.  We should harness panic as a public health tool rather than a hindrance.