News Public Lecture by Leading US Scholar, Irish Americans in the first Parliament of Religions 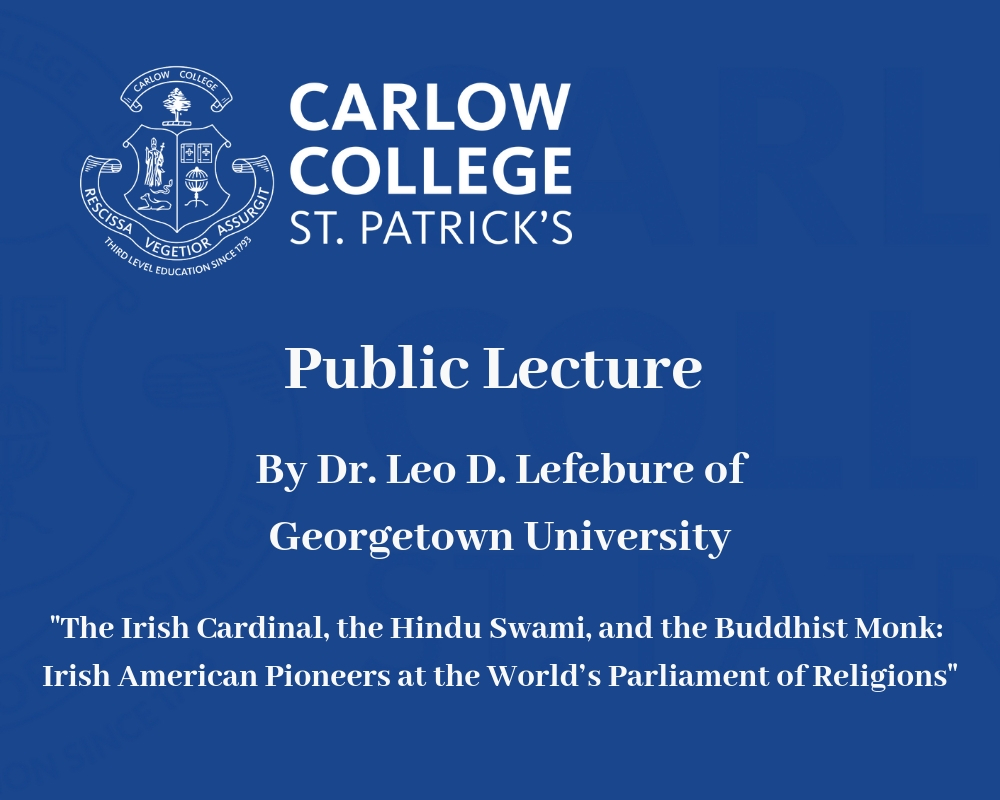 We look forward to welcoming Leo D. Lefebure of Georgetown University who will give a public lecture titled ‘Interreligious dialogue with Muslims, Jews, Hindus and Buddhists: Challenges and Opportunities’

Taking place on Monday 8th April at 1.45pm the lecture will discuss the pioneering leadership of Irish Americans in the first Parliament of Religions and the controversy and positive legacy that followed.

This is a free public event, however registration is required

The Irish Cardinal, the Hindu Swami, and the Buddhist Monk: Irish American Pioneers at the World’s Parliament of Religions

On September 11, 1893, James Cardinal Gibbons, the Archbishop of Baltimore who had been raised in County Mayo, opened The World’s Parliament of Religions in Chicago with the Lord’s Prayer.  Together with him on the stage were Hindu Swami Vivekananda from India, Zen monk Shaku Soyen from Japan, Theravada Buddhist leader Anagarika Dharmapala from Sri Lanka, as well as many Jewish, Protestant, Greek Orthodox, Hindu, Buddhist, Muslim, Jain, Zoroastrian, Parsee, Daoist, Shinto, and Confucian leaders from around the world.  It is striking that of the Catholic delegation, almost all the speakers, including Cardinal Gibbons, Archbishops Patrick Feehan and John Ireland, and Bishop John J. Keane, had been born or raised in Ireland.  Even though these leaders would endure considerable opposition and criticism, Keane noted that all the other forms of religion would be ably represented at the Parliament and pointedly asked, “Can the Catholic Church afford not to be there?”

Dr. Leo D. Lefebure is the Matteo Ricci, S.J., Professor of Theology at Georgetown University in Washington, D.C. and a priest of the Archdiocese of Chicago. He is the author of True and Holy: Christian Scripture and Other Religions, which received the Catholic Press Association first prize in 2015 for best academic book on scripture. Lefebure is the co-author with Peter Feldmeier of The Path of Wisdom: A Christian Commentary on the Dhammapada. His other books include: Revelation, the Religions and Violence,:The Buddha and the Christ; Toward a Contemporary Wisdom Christology: A Study of Karl Rahner and Norman Pittenger. Lefebure is an honorary research fellow of the Chinese University of Hong Kong and a Trustee Emeritus of the Council for a Parliament of the World’s Religions.